The Lady of Shalott

I thought it would be nice to put up Tennyson's poem, Waterhouse's painting, and Loreena McKennitt's beautiful setting of the poem (a frequent earworm for me). This is the Arthurian Legend filtered through Victorian morality and sensibility, but this work, with its theme of unsated desire, speaks profoundly to me as a trans person.


THE LADY OF SHALOTT 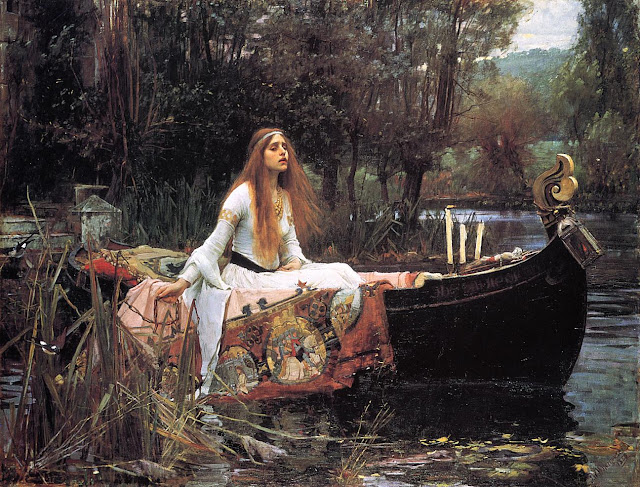 Gillian, I have to admit that even though I read almost every word of the books in my partner's English Lit degree course when I was a young thing i have always had an aversion to poems longer than haiku...

Preruffelights have long been popular painters here but while familiar with the painting of the lady of the fancy onions I looked in horror at an Ell long poem...

Once I had re Flashed my Mac and was able to hear the wifey singing the poem to the endless images of beautifully dressed but doomed maids things cheered up, heck I am going to play it again...

Curiosity took me to autopsies of the text, those "reading Eng Lit did not enjoy the books as much as me who did not have to dissect them. So poetry is just concentrated crossword puzzles?

Poetry is indeed concentrated thought and emotion. A.E. Housman said that a true poem was something that when recited while shaving makes one's whiskers (or leg hairs) stand on end. I have to admit that even as an English Literature major, I never really began to appreciate poetry until I began to teach it. Though I have to admit a fascination with ballads that goes back to my late teens. I love a story that is sung.

I'm only starting to appreciate poetry, though I must admit to having a difficult time 'decoding' it. As a child in a Catholic school we were called upon to memorize poetry. I am horrible at memorizing—my brain just refuses. Put me in a position where I can conceptualize something and my memory locks on to the facts like a tractor beam and doesn't let go. I marvel a people who can recite poems verbatim and memorize lines of a play.

Having memorized poetry, etc. can be a comfort when one is driving across the Arizona desert.