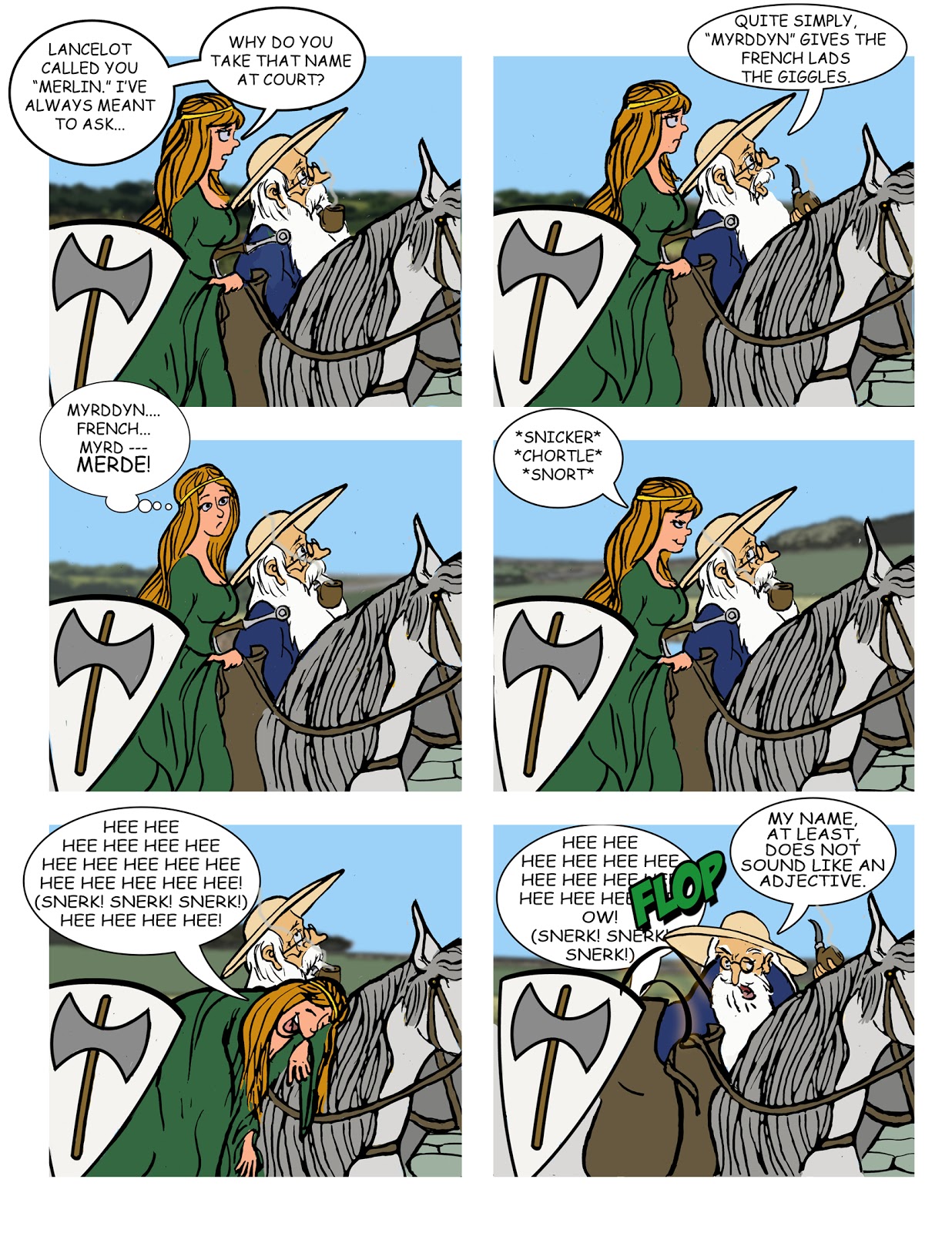 To be a pedant *smile* Isn't the Welsh "dd" like a thorn? Hence making the pun invalid for French?

The strip was funny. Regardless.

I've actually based this strip on a footnote I've seen in more than one place. Apparently, Welsh pronunciation regardless, the odious pun was the reason the Breton bards changed his name.

And I could never pass up such a wonderful cheap joke.

Not one of your better one's, unless of course you assume your audience is well versed in French and Welsh (which I'm not, though admittedly it is easy enough in today's world to search out). That done, it still leaves unclear Merlin's retort at the end—unless it refers to the possible etymology of Calogrenant as "Keu le grognon", Kay the Grumpy. I guess my point is, in order to understand this 'strip' requires a bit too much special knowledge and a requirement for digging that comes up with unclear results; and makes it appear too much as an inside joke.

I did a little extra digging and found that this presumed etymology seems to be a bit of a stretch; and doesn't really make any sense because Kay and Calogrenant are really two different people. Doing a little digging I found a reference to a book by Frank D. Reno entitled "Arthurian Figures of History and Legend: A Biographical Dictionary". In it's description of Calogrenant it indicates that he made his first appearance in Chretien De Troyes "Le Chevalier au lion". It goes on to state that "During the feast of Pentecost at King Arthur's court in Carduel Iidentified as Carlisle in Wales) Calogrenant, Sagremor, and Dodinel are three knights in attendance. Calogrenant, described as very handsome, makes a point of honoring Queen Guinevere by jumping up from his seat. Sir Kay, who is portrayed in many of the tales as spiteful and abusive, chides Calogrenant for his ostentatious actions. The queen defends the handsome knight, calling Kay tiresome and base, but Kay continues his tirade, after which he implores that there be no more quarreling. Calogrenant slights Kay with a barb, saying that a dung heap will always smell and a cad will always slander and vex others...." So the information available 'out there' seems to support the pun which is the subject of your 'strip' and is alluded to in Reno's description above. However there isn't anything to be found (easily) that might accurately explain the retort.

Sorry I can't be more positive on this one.

As I said, I was indulging in a cheap joke. Myrddyn's retort is totally anachronistic and based completely on a modern English adjectival suffix - as in "mordant" or "arrogant." Myrddyn is flustered, and this was the best comeback he could manage under the circumstances.

And I think very highly of my audience - you in particular, Zoë.