Over the past few days, I've been mulling over what to write about. The elections are over. Obama's working out his plan of action. I've said about everything I'm going to say about Prop 8 (it sucks; the California Supreme Court is going to hold hearings; fingers crossed; in the meantime, keep to the high road: don't harass old homophobic ladies in Palm Springs or elsewhere). And I've got a truckload of papers to grade. So...

I'm going to tell you a story. This is my retelling of a Scottish folktale collected by Linda Williamson from Betsy Whyte of Collessie, Fife on April 16, 1987. The original is to be found in The Penguin Book of Scottish Folktales, edited by Neil Philip. It's one of the first stories in my repertoire. Be forewarned: it's one of the saddest stories I know.

The Laird was rumored to be a master of the black arts, and though he kept both an open hall and hand, all thereabouts agreed that one would be wise to keep well on his good side. He was also fond of a joke, especially if it was at the expense of another. So it was that on the night of a great cèilidh that he hosted each year in his his manor, he called for Auld Sandy, his cowherd. Sandy, it was agreed by all, was only a few degrees brighter than the cows he kept. 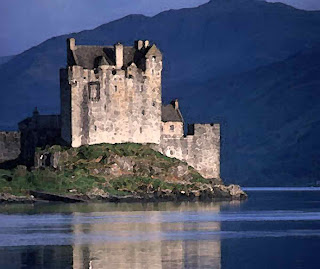 The Laird's bully boy found Sandy on a stool in the byre, lightly dozing between two of his charges. Affectionately but firmly, Sandy was lifted from his seat and conducted to the great hall where the Laird was firmly ensconced on a far grander seat of his own.

"Sandy," said the Laird, "We've become bored with the music and the dancing. Tell us the best lie ye know and I'll give ye a soveriegn."

Sandy looked blankly at his master, removed his cloth cap, ran his fingers through his grizzled hair, and then rubbed the backs of his calloused knuckles against the graying stubble on his chin.

The Laird frowned, and his voice rang through the hall, "What use are you then?" He then winked to company when Sandy lowered his head in shame. "Here. I've a currach on the banks of the loch, and I've a mind to fish tomorrow. Go, bail it out and patch it."

Sandy pulled his forelock and shambled from the hall. He found the currach easily enough, and indeed, water had seeped through the tarred leather hull and now filled the small boat. Sandy found a pan on the bank and began to bail. Eventually, after he'd emptied the boat halfway, he found it necessary to get inside in order to reach the water in the bottom. So intent was he on his task, that he took no notice when the boat came free of the shore and began to drift into the loch.

Only when he was several yards from shore did he realize that he was afloat with no oars. Panic seized him and he began to shout for help, but the lawn between the great hall and the banks of the loch was devoid of people. He could do nothing but sit quietly in the currach as it drifted further into the center of the loch and into a fog bank. As the fog enveloped the currach, Sandy began to feel a tingling throughout his body and a wave of dizziness. He put his hand on the gunwale to steady himself and was surprised to see that it was not his hand he thrust forth. It was not the brown, calloused hand of an aging cowherd, but the small, soft hand of a well-born young woman. Sandy's eyes moved from the hand to where a pair of old, worn boots, covered with years and years of cow dung should have been. Instead, Sandy's eyes found a pair of dainty black slippers of the finest neat's leather, and no patched breeches, but a yellow taffeta gown. Risking capsize, Sandy's head thrust over the gunwales, meeting the eyes of a golden-haired lassie of no more than nineteen looking up from the gray water. Every shred of panic left Sandy as the currach cleared the fog bank. The beautiful young woman sat stock still and moved only when she heard a man's voice hailing her from the shore before her. She looked up and saw a young man hailing her from a promontory. Could he be of assistance? Fearful of what voice might issue from her throat, she replied with a firm nod. The young man ran to the shore and dove into the water. The young woman overcame her shock enough to feel sympathetic chills as the saw the young man plow toward her through the icy water.

Having guided the currach to shore, the young man easily lifted the girl from the currach and stood her on dry land. Her breath caught at his touch, and her heart blossomed as their eyes met. "My name is Alec Buchanan," he said. "It's my family's land we're on. What's yer name? Where d'ye come from?" he asked.

"Al-" She caught herself for a split second, hearing with relief a woman's dulcet voice, and she found to her surprise that she had never thought this clearly before. I can't very well say that I'm Alexander MacSorley, the half-witted cowherd from across the loch, she thought. She spoke again. "Alison MacSorley," she said. She'd found the currach and sat in it for a lark. Before she knew it she had drifted...

Neither of them completely remembered the story in later years. By the time she turned to follow him to his freehold where he lived with his mother, it was agreed they would be wed. Maisie Buchanan could never get over how this high-born lassie that her son had fished out of the loch could take so well to housekeeping, and Alison came to love her mother-in-law as if she were her own. And she never ceased to take joy in the mere presence of her husband. Five bonny bairns she gave him, one for each year they were together.

It was while she was still nursing the fifth child that a fancy came upon her that she must walk upon the beach. She, Alec, and the children walked in the sunlight and down to 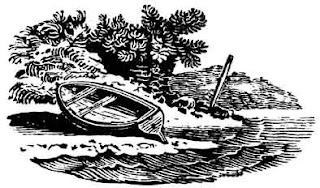 the shore. Something black glistened on the shore.

"Look," said Alison, hearing her own voice as in a dream, "It's the currach that brought me here. Och! It's full of water."

She brought the sleeping, sated child from under her shawl, put him in her husband's arms, and ran to the shore. Before he could protest that the currach she spoke of had drifted back into the loch the second he had lifted her from it, she was in the boat and bailing. He had a baby in his arms and a toddler at his feet. He could not run after her. He could only watch as the currach drifted into the lock, carrying away his wife and the mother of his children.

When Alison came to her senses, it was too late. She turned to see Alec and the children, now black specks on the shore. As before, there were no oars.

"Alec!" she screamed, "My bairns!" And she repeated the screams as she drifted into the fog bank. When the voice became harsh and deep, she fell silent, not daring to look down.

When the currach bumped ashore, a figure in a cloth cap, soiled boots, and worn breaches shambled from it and up to the great hall. The door opened. The Laird looked down from his seat at the figure in the doorway.

"Sandy," the Laird beamed, and the figure fell to the floor weeping.

At a tacit signal from the Laird, the bully boy brought Sandy to his feet.

"What on earth are you on about, Sandy?"

In the voice of a fifty-year-old cowherd, a twenty-four-year-old wife and mother told of the loves and joys, now lost, of the past five years . The Laird laughed, and so did all the company as the cold reality crept into Sandy's mind.

"Five years!" roared the Laird through his laughter, "Sandy, ye've only been gone twenty minutes. But," he laughed, holding up a golden sovereign, "ye've told the finest lie I've heard this night. The sovereign is yours."

Sandy stood silent. He ran the back of his hand against his unshaven chin, a gesture that was now as foreign to him as the feeling of the beard itself. Slowly, he took off his cloth cap and slowly shuffled toward the Laird's high chair. He stared at the sovereign for a long time before he took it, turned, and shuffled from the hall to go and sleep amongst the cattle.

You're right, Jill, that's a truly sad tale for anyone, and especially so for those like us who feel the pull of the the girlhood, the motherhood, that we will never experience. Thanks for sharing it with us.

I want to start sharing more of the stories that I tell. I was hesitant to post this, but there is such a feel of truth to it that I knew I eventually had to. One of my professors collected folksongs in the Appalachans back in the 60's. When he'd collected a particularly sad song from an old woman, my professor's wife asked, "Why are these songs so sad?" to which the old woman replied, "Because they're true, Honey."

I'd have killed myself whot with all that... I'd have left the wee vessel right were it was, and never looked back.

The Loch is a strange and magical place, and given what I know of it, wonder how much truth there might be in the 'fiction' of the tale told now these many years later...

I agree with Stephanie, if my new life is a dream, then shoot me now, t'would be a kindness you know!

Holy Hannah, it's coming up on a decade since I found my way here. What a decade it's been, and what a wonderful part of it you've been Gillian. More and more my old life fades into the mists, and this life, my life, is such a blessing, especially with you in it. Thank you Gillybean, I love you!