The Gift of Tiresias

I was afraid of this: start a blog with the idea of writing regularly, have a whole bunch of ideas for postings, get ready to write, and THUD! A combination of writer’s block and gotta-dos delays me for a week and everything reeks (to me at least) of anti-climax.

Let me tell you about Tiresias. I first read Sophocles’ Oedipus Rex as a teenager, and even to this day, the idea of exacting a horrendous price on one’s self for an act over which one had really no control strikes a chord in the more Calvinist reaches of my heart. But the character who really fascinated me was Tiresias.

On the first reading, Tiresias was for me the same kind of character as Merlin or Gandalf. Soothsayers and wizards were for me (and indeed they are) cut from the same mythic cloth. All of them are a step aside from the rest of humanity, imbued with what the Irish called imbas forosnai: the fire in the head. With the power of magic and prophesy must also come at least a little insanity. (In his earliest stories, Merlin was a madman.)

So here was Tiresias, blinded but seeing the past, present, and future, futilely trying to wise up Oedipus, who is stone blind to his true nature. (Maybe it was a bit of prescience that caused me to be fascinated by this character any high school teacher feels the same frustration – after more than twenty years in the classroom I can vouch for that. Cassandra is another mythic figure for the classroom teacher: cursed by Apollo, she sees the future, but nobody believes her. Arrgh!)
(At right in a typically eerie John Fuseli painting, Tiresias, now in the bowels of Hades, tells 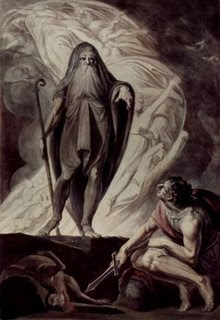 Odysseus how to get home.)

It wasn’t until later, and about the time that I was finally coming to grips, after years of denial, with my own gender duality that I learned Tiresias’ whole story. I came to Sophocles early, but I came to Ovid late, but there it was, in the pages of Metamorphoses, the source of Tiresias’ wisdom.

…It happened, so the story goes, that Jupiter put aside his weighty cares; mellowed by deep draughts of nectar, he indulged in idle banter with Juno, who shared his leisure, and teased her, saying: ‘of course, you women get far more pleasure out of love than men do.’ Juno denied that this was true. They decided to ask the opinion of the wise Tiresias, for he had experienced love both as a man and as a woman. 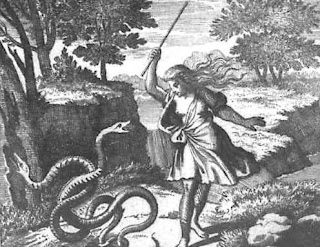 Once, when two huge serpents were intertwining themselves in the depths of the green wood, he had struck them with his staff; from being a man he was miraculously changed into a woman, and had lived as such for seven years. In the eighth year he saw the same serpents again and said: 'If there is such potent magic in the act of striking you that it changes the striker to the opposite sex, I shall now strike you again.' So, by striking the same snakes, he was restored to his former shape, and the nature with which he was born returned.

He, then, was chosen to give his verdict in this playful argument, and he confirmed what Jupiter had said. Then, they say, Juno was more indignant than she had any right to be, more so than the case demanded, and she condemned the judge to eternal blindness. It is not possible for any god to judge the actions of another god, but in return for his loss of sight, the omnipotent father granted Tiresias the power to know the future and softened his punishment by conferring this honour upon him.

His fame spread throughout the Aonian cities, and when the people consulted him he gave replies with which none could find fault.
From Ovid’s Metamorphoses, translated by Mary M Innes, Penguin, 1955
Forget the paradoxical blindness. Tiresias had been both male and female and was given the ability to see the future. Jupiter had already acknowledged that this person had knowledge greater than his own, and Juno punished him (I suspect) not so much for proving her wrong but for spilling the beans. Because he has been both male and female, Tiresias knows more than the gods!

When I first acknowledge my transgenderism by stepping in front of an audience and telling stories, this is the first one I told. I imagined Tiresias’ shock, resignation and final acceptance as she became a courtesan (what better occupation for a single woman in such a place and time as ancient Greece, where women were otherwise powerless? And who better to know what pleases a man? Though another Greek poet says she became a priestess of Hera, married and bore children.) I imagined the inconvenience of the retransformation, not the least of which would be the newly male Tiresias having to purge his wardrobe.

What struck me strongest and continues to strike me, however, is this: at its base this is the story of a shaman coming into his/her power. Imagine the shock of a Greek audience when Oedipus or some other tragic king accuses Tiresias of lying or taking bribes. For all of their antifeminism the Greeks knew that someone with Tiresias’ background was no one to take lightly.

I can’t flatter myself that I have the wisdom of Tiresias, but I can remind myself that being transgendered can give me, if I let it, an uncommon capacity for insight and empathy. For that reason, I feel that those of us who are transgendered, no matter where we are on the continuum, from occasional crossdresser to the married woman in stealth, do ourselves and those who come in contact with us a disservice when we shun or ignore the true gift (and burden, for all spiritual gifts come with a price) of our duality. That is the true gift that is given to Tiresias and us.
Posted by Gillian at 7:53 PM

The myth of Tiresias is very interesting. The association of two sacred snakes with Hera suggests to me--and mind you, this is only speculation on my part because I've never seen it suggested anywhere--that this myth is VERY old. Hera is not usually associated with snakes. The only other case where she is is the episode where she sends two serpents to kill the baby Herakles in his crib, but this doesn't seem a matter of totemic attributes, while the snakes in the Tiresias story DO. Anyway, the reason that I think this story is very old is because there IS a mother goddess associated with (two) snake in the Minoan pantheon. Whether this is an antecedant to Hera, I can only speculate, but I think she is. She's depicted in a fairly famous statue: http://z.about.com/d/atheism/1/0/Q/T/MinoanSnakeGoddessColor-l.jpg

I also wonder about the admixture of oral traditions given the similarities of some of the myth of Tiresias with the myth of Hermaphroditus and Salmacis, in which both male characters stumble across a goddess (or demi-goddess) bathing.

The Myth of Tiresias is interesting in one other respect. It's one of the few myths that seems to exist almost solely from literary sources (from Hesiod, mostly) rather than from art. It doesn't seem to have been depicted often, if at all, by Greek visual artists.

Oh, by the way, the painter you reference is Henri Fuseli, not "John". Although it's not depicted in this particular piece, Fuseli often included castration and dismemberment imagery in his paintings. He was kind of a weirdo.

As I understand it, the snake, because it sheds its skin, represents immortality. Take, for example, its role in the Gilgamesh epic, swallowing the plant that will give Gilgamesh perpetual youth. Of course, the snake being phallic, in the hands of a goddess we might see divine androgyny.

As regards the Minoan mother goddess being antecedent to Hera, I hang out with women who consider all goddesses as avatars of the one goddess. My visceral feeling about the direct connection between Hera and the Minoan goddess is a bit ambivalent, and it has to do with the iconography. Hera is depicted with the distaff, the pomegranate (ovary?) and the peacock. She's not just a mother goddess, but a goddess of marriage. The Minoan goddess seems in a frenzy of passion. Of course, the patriarchal Hellenic society might have robbed Hera of a bit of her ginger.

I'm also fascinated with the bathing motif. When I've taught the Odyssey, I've pointed out that while Odysseus is out on the sea, he's dealing with multiple images of the seductive and destructive feminine. If water is the subconscious,then the sirens, Circe, Scylla and Charybdis, and Calypso might all be manifestations of Odysseus' subconscious. In a society as femophobic as ancient Greece, it's not surprising that the feminine would manifest in this way. I'm also reminded of the story of Acteon, who also stumbles upon Artemis in her bath, is transformed into a stag, and is devoured by his own dogs.

You're right about the art, which is interesting since Greek artists don't seem to have any qualms about depicting Hermaphroditus and other intersexed individuals.

Finally, we're both right about Fuseli. His given name was Johann Heinrich Füssli, but went by John Henry Fuseli. I admit that I was being a little lazy. I was starting to zonk when I posted and couldn't remember which first name he went by. ;)