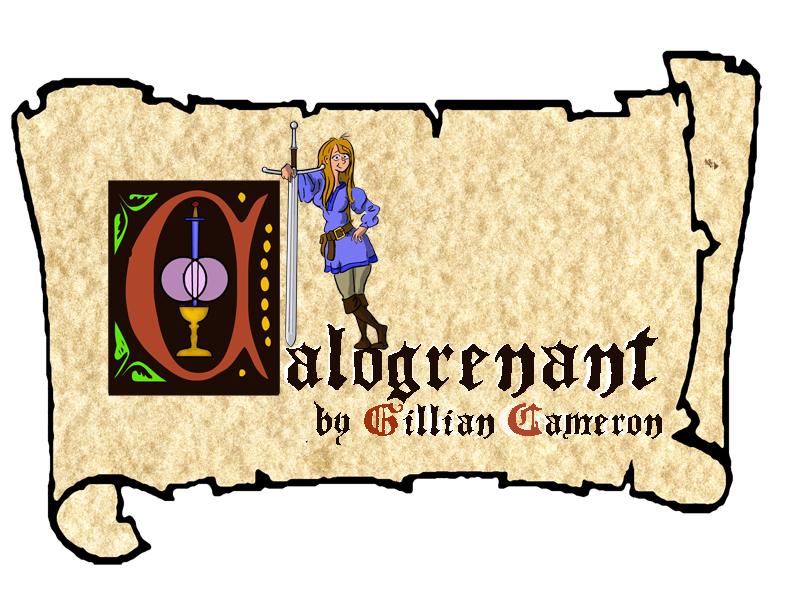 This week's installment of Calogrenant is online at calogrenant.com.
Posted by Gillian at 10:25 PM 2 comments:

This began as a Facebook post, but since I've done nothing but post Cally here for some time, I figured this would be the best place to express it.

Maybe I've been blind, but I've never really felt "male privilege." Maybe that's because I've always felt that to assert anything like male privilege is to be a schmuck. What I have felt is the inability to express my love for anyone but my closest friends and family. I have felt stifled. When that part of me is put aside (much as I love him, since that persona was created to be the kind of person I could stand to be and has a capacity for goofiness and "Mr. Chips" pedantry), I feel the freedom to spread that love much further afield and to express it more openly. I cannot speak for all straight, white males, but there was always an awkwardness in reaching out to other straight white males. I wouldn't call it homophobia. Perhaps it was idiosyncratic, perhaps familial, I don't know. Whatever the reason, my expression of affection was restricted. Opening this more visceral part of myself has made me more demonstrative. I am freer with hugs than I have ever been. I feel no compunction about holding the hand of a dear friend and expressing my joy at being in their company. I have kissed more people in the past few years than I ever have in my life. And, needless to say, none of this physicality has anything to do with the sensual. (Though that would be nice as well.)

So what has happened? I have lost inhibitions. I have opened myself to my emotions, and they are overwhelmingly positive. I have come into my womanhood at a time when most genetic women are grandmothers, and I find myself becoming like the women I have most admired - voluminous women who engulf all about them with affection. I'm the older aunt who hugged you to the point of annoyance and got lipstick all over you when you were five. But these were also strong women - these women I've admired - and artsy and literate and funny and maybe too loud. They were my teachers, my colleagues, my relatives.

I fear sometimes that I am merely emulating. That perhaps, as some have suggested, that this aspect of me is not authentic. That I am delusional.  If this is a delusion, then I prefer it to the gray reality, and if I am, indeed, emulating, then I cannot think of better people to emulate, and the result, while it may be a little sloppy and may take one or two people aback, is the most wonderful freedom I have ever felt. I'm still not sure about male privilege, but this ability to express affection seems a female one.

Today, by the way, President Barack Obama signed an executive order banning discrimination based on sexual or gender orientation by government contractors. I really never thought I'd see an action like this.
Posted by Gillian at 10:23 AM 4 comments:

This week's installment of Calogrenant is online atcalogrenant.com.
Posted by Gillian at 10:19 PM No comments:

Two hours late, but... this week's Calogrenant is online at calogrenant.com.
Posted by Gillian at 12:09 AM No comments:

This week's Calogrenant is online at calogrenant.com.
Posted by Gillian at 10:12 PM No comments: